Sending The Singularity University Shield to the Edge of Space 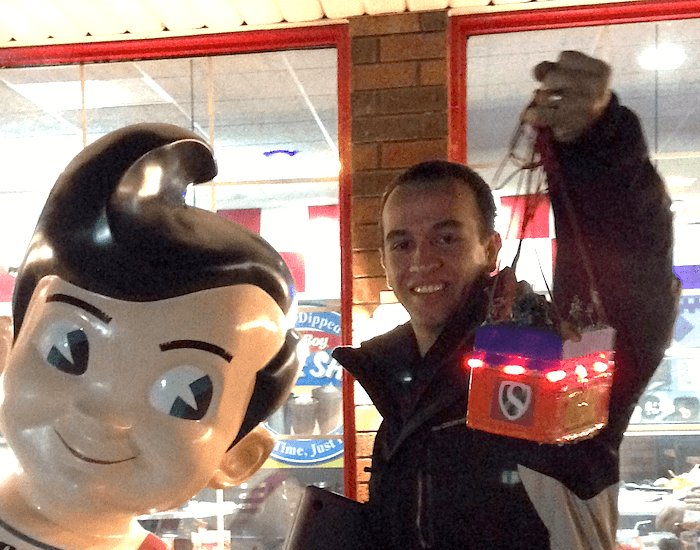 Based at NASA Research Park in Moffett Field, California, Singularity University is a one of a kind. It was devised with the goal of teaching students about exponential technologies and how to use them to address humanity’s greatest challenges.

Since I first heard about the program, I knew it was something I wanted to pursue. The idea of getting together with these brilliant people and being able to learn, share, and use my skills to do something that can change the world for good is extremely appealing to me, and definitely something I’d love to pursue.

As soon as they opened their application for 2014, I thought of applying. Then, I had the idea to devise a Mission to honor and pay tribute to their efforts to positively impact the world. It may sound cliché, but I’ve long dreamed of becoming an astronaut, and knowing how involved they are with Space Exploration matters, I decided that I wanted to come with some idea along those lines.

These guys are pursuing bold ideas, that almost always seem impossible to accomplish. How could I properly honor the efforts of such a team?

I always wanted to go to space. And I know most of them want that too. So… maybe I could go with them to space?
For as much as some of their ideas might sound crazy at first, I knew for sure that this one have beaten all levels of craziness and then some more. It was the perfect tribute to honor their efforts and I couldn’t give up on the idea. But… how could I go with them to space?

That’s when I devised the deBort Mission.

While talking about the vast distances of the Universe and our physical inability to be present in two places at the same time, or to send our bodies to distant places, Kurzweil suggested in his book Singularity is Near that we could send machines to represent us.

Thinking of that, maybe I had a shot at going to the space with them while not sending our bodies up there. The biggest chunk of the cost involved in Space Exploration is life support in an environment that is absolutely hostile to life. Sending equipments up there still requires a lot of planning, testing, and flawless execution, but it costs just a fraction of the costs of sending people up there. Also, I could achieve that before the application period was over.

I put myself together and began to investigate on cheap ways to send stuff up there. Weather balloons were a cheap, although not complete option: it can’t get a payload across the Kármán line, but it can get pretty high up in the stratosphere, which is good enough to get a feel of the darkness of space and looking down on earth as if you were looking from space. That’s why some call it the edge of space.

I bought the idea, and start devising the mission. I wanted to create a nice experience, had a short timetable, and lots to do.

Wrote down my ideas, and decided that the mission’s goal was to send the Singularity Shield up there and record it in the foreground against the earth’s horizon and the space above. I designed a mission patch that would represent the mission’s goal, investigated the best cameras and trackers, and then I designed and 3D printed both the shield and the payload box that were going to be sent out there.

I had everything ready in about a month, and launched it Saturday morning, 10:00 am as planned. Due to extreme weather conditions, the balloon could not be filled to its full capacity for optimum lift and ascent rate, changing the planned trajectory and significantly increasing the distance between the launch and landing site, but despite all the odds the mission was successful!

It recorded a rare and beautiful image of the formation of a huge storm over the states of Illinois, Indiana, and Michigan – Yes, it recorded from above the storm that caused over 20 tornados in the region the next day!

Special thanks to my wife Vanessa who supported me all the way in this pursuit, and friends Chris Detmer, John Ostler, and Trent Sparrow who joined and helped me make it happen.

You can watch below the video compilation I did, covering all the steps of the mission. Enjoy!