Three Moves Ahead: What Chess Can Teach You about Business 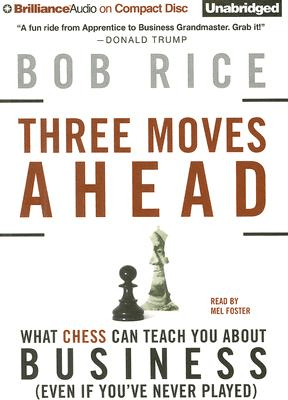 It is been a long while since last time I played chess, but I still remember how to play it!

Chess players are well know as strategists, and the ability to make decisions during the game and be always prepared to change your strategy to cease an opportunity or to counter-attack an unseen move are core abilities of any entrepreneur.

For starters, the book brings up one of the mistakes entrepreneurs usually commit by assuming that being the first at a given market is a reason for succeeding in the game. Much like in chess, playing with the white pieces is proven to give you statistical advantage to win the game because you’re the first to move, and thus, able to lay your plan without having to consider any actions taken from your opponent – which in turn is enforced to lay a plan considering your initial move. If by starting the game you’d be guaranteed to win or have a significantly higher chance to win, why would you even play if you get the black pieces? It is the same thing in business, and nobody should be discouraged to enter a market where a first mover have already settled in as much as nobody should think that by starting the game they’ll ultimately win it.

The fight between Betamax vs VHS is the classical example used in the book, since although Betamax was the first mover it was ultimately defeated by VHS’ smarter moves.

Overload is another mistake usually committed by newcomers to the game as well as by immature entrepreneurs. When you learn that in Chess the most powerful piece (in terms of movement and board coverage) is the Queen, the first thing you want to do is to unleash her power and have her dominate the board. ignoring the relatively least powerful Pawns and powerful but awkward (at first) Knights. In a business this is the equivalent of the inability to assign tasks and try to play all roles by itself. Soon enough, you’ll overloaded, exposed and ultimately defeated.
Pawns, although limited in movement, can become a Queen if  it manages to reach the other end of the board. If ignored and neglected, the inability to wisely use your pawns not only will hurt the company and overload its leaders but it will ultimately compromise it’s leaders’ survival.

Sometimes you’ll also need to sacrifice an important piece to change the game dynamics. Nobody enjoys making sacrifices, but chess players understands that some times a powerful piece must be sacrificed so the game can progress. Entrepreneurs must pay attention to the market, identify trends and be willing to sacrifice business models to ensure a future, like Aol did when it sacrificed it’s revenue from dial-up customers for internet access when free dial-up ISPs began to flood the market. It was a late move with its consequences, but have ultimately allowed Aol to survive a market change that would soon kill it.

When it comes to comparing Open Source to Chess, the author seems to have misunderstood the way Open Source works. His conclusion is that Open Source software have no central control and that its future is unknown and uncontrollable, which could ultimately prevent it from fulfilling the market needs and trends. Not true: virtually all significant Open Source softwares are controlled and maintained by an organization or a group of people, and they are in charge of deciding what will feature or not a new version, giving open source the ability to follow market trends and respond to users’ needs.

Two other components of the game that are often overseen by entrepreneurs are the facts that the clock is ticking, and your opponent is watching your moves. There are no concealed moves in the age of the Internet, and you have to assume that your opponent will respond with his best move, not the one you believe he’d be more likely to take. If you don’t respect the clock and don’t respect the opponent’s intelligence you’ll soon be defeated.

And ultimately, review your wins and see where you could have done even better or why have you done better than your opponent. This is a great ability not only to chess players and entrepreneurs, but to any breathing being in this planet. We usually take wins for granted and when we lose, we tend blame the others and once in a while we may admit the defeat and spend a minute or two thinking of what have gone wrong and how it could be improved.

I highly recommend this book, and I think it is a must read for any entrepreneur, whether he or she knows how to play Chess or not.