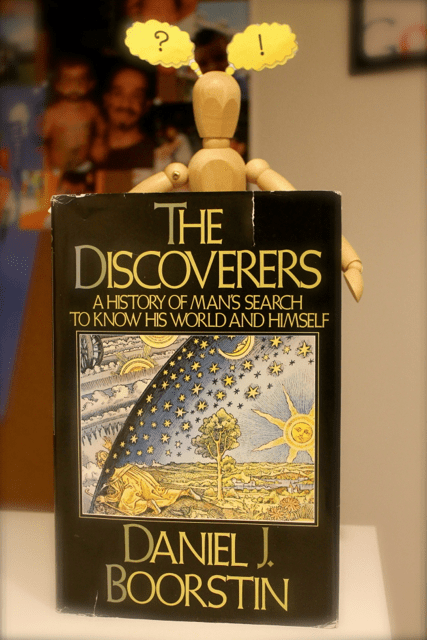 This book is a treasure chest full of memories on how we have gotten where we are today. Learning of the past mistakes and successes helps us avoid present pitfalls and flirt with a brighter future.

The author, Daniel Boorstin – the Librarian of Congress from 1975 to 1987, did an amazing trip through man’s most important discoveries revealing motivations, fortunes, and mishaps behind the most important discoveries and inventions of mankind. The book is huge, and subdivided in 4 books: Time, The Earth and The Seas, Nature, and Society. To make justice to its content, I’ll split this review in 4, and review them as I finish reading.

It wasn’t really an invention or a discovery, but finding ways to understand and measure it was definitely one of the most important steps mankind have taken towards understanding nature and improving its ability to exert control over some of it. Contrary to what one would think, figuring out the best way to measure time and devise mechanisms to keep track of it was one of the most excruciating endeavors mankind have taken and it continues to be subject for discoveries and improvements even today.

Reviving the process of devising methods for tracking the years, seasons, months, days, hours, minutes, and seconds was of vital importance for agriculture, navigation, astronomy, and living in society. We take of those for granted today, but understanding the initial motivations and challenges is a really inspiring process that inevitably drives you to make important parallels on challenges we’re forced to deal with today and where we’re headed to.

Towards the end of this book, it makes an interesting parallel between the time measurement advances of the west (Europe) versus east (Asia, mostly China and Japan). While Europe was well developed in the art of clockmaking, and have even created portable clocks with very good precision using springs, the Asians were lagging far behind, using a far less precise running water based mechanism to track time and avoiding the populace from having access to it. Censorship played a big role there – people were prevented from even studying astronomy, and the trusted scholars allowed to study it were taught to avoid innovations in that area to prevent the understanding so astronomy to become a threat to the empire. Time measurement only found some hope due to the Catholic Church’s missionary work, because priests were trained to tune and maintain their own clocks and during their missions to Asia, they managed to teach them how to develop and keep track of time using the European techniques.

Can’t recommend it enough. Worth every page and time spent, it is a precious pearl to treasure and read.