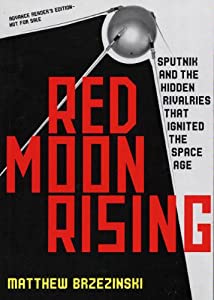 Outstanding book for those who would like to learn more about the not so obvious and not so publicized backstage history on one of the most peculiar periods mankind have gone through in modern history.

I have always had a special interest for Space Exploration and modern History, and this book is a perfect marriage of both subjects covering with minute and unbiased details about the beginning of the Arms race, Space race and Cold War covering the events that occurred right after Second World War until the successful launch of US’ first artificial satellite, Explorer 1, going through Sputnik 1 and 2 and the several technological challenges and breakthroughs in rocket science achieved during this period, propelled mostly by Germany’s engineering spoils.

Sputnik 1 was designed to have a round mirror shape so it could be seen from the earth. It’s size and weight far surpassed American rocket’s payload capacity to such an extent that when American scientists learned of its measurements they initially thought that it’s weight decimal point was misplaced.

Sputnik 2 was a mission carried out in about 3 weeks, and it was rushed to mark the 40th Anniversary of the Bolshevik Revolution. Poor Laica survived for just a few hours instead of the initially planned 10 days, after been roasted due to an issue with the thermal regulation system.

Explorer 1 was the American response to Sputnik 1, and it really didn’t do much more than Sputnik 1 but marked the beginning of the Space Race.