Crush It!: Why NOW Is the Time to Cash In on Your Passion 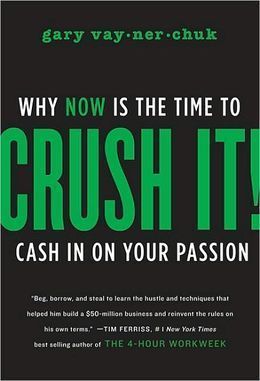 I may have been the first person who bought Crush It! before knowing who Gary Vaynerchuk was and having never seen the Wine Library TV. The latter being of no surprise, since I don’t drink. Instead of going for the book, I bought the audiobook at audible which is narrated by Gary Vaynerchuck himself. His energy and enthusiasm really got me excited right off the bat, and the way he narrates really shows his passion and love for what he does. Since I’ve never seen any of his videos before, that also struck me as an odd behavior – I was used to well behaved narrators – and got me curious to know more about who was that guy.

After learning of who he was, watching some of his videos and some of the parodies and spoofs fans shot about him and his program I understood all the buz around Crush It! and Gary.

Inspiring book, highly recommended for anyone interested in starting its own business and who is trying to find some inspiration on what to do and how to implement the idea. Also, recommended for those looking for ideas on how to build a better web presence and boost their image or their company’s image on the web through blog posting, social networking, video, etc.

For those thinking of buying the audio book, beware: Gary’s excitement is contagious! Everything he says on the book will get you excited to get out there and give it a try. Some of that excitement comes from the text, but you’ll see that most of it is passed through his energetic narration and several interruptions to go off the script and tell you hints and ideas that are not present in the printed version of the book.