Abundance – The Future is Better Than You Think 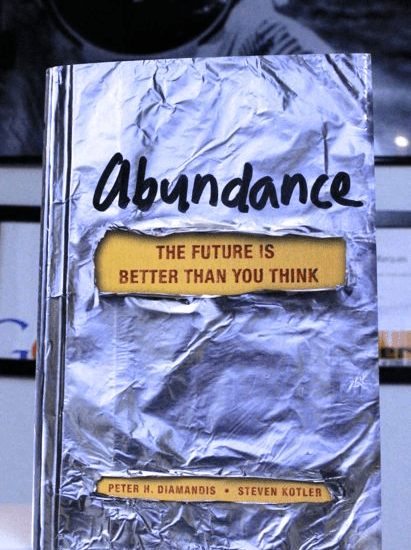 We’re used to hear about doomsday news every day, and we have literally become accustomed to the “fact” that we are a hopeless generation, that will soon become extinct by either famine, lack of water, a dreadful disease epidemic, terrorist attacks, or something worse. People just don’t realize how much better off is the world we live in today than it was a few decades ago, for the most part. Reality is that positive and encouraging news do not sell as much as doomsday news. It is just how our brains are wired to work – it is always in the lookout for things that might threaten our survival.

In 1968, Paul R. Ehrlich published the book called “The Population Bomb“, that scared the hell out of the whole world, predicting that food production would soon fall behind the population growth rate, causing widespread deaths and potentially wars, possibly causing human extinction. Personally, I think that book always belonged to the Sci-Fi genre. In fact, I’d like to have a time machine just to send a copy of Abundance for that author sometime around 1967 to have him correct the direction of that book. Unfortunately, I’m sure that if he had talked about positive predictions for the future, it would have never sold as many copies as it did, and would have caused a much smaller impact in shaping our perspective of what awaits humanity in the future.

On the upside, Abundance is indeed being a huge success, even though its message is positive and encouraging – something that newspapers have a really hard time selling. Thanks to technology today, people are talking, recommending, and relaying more of the message of hope and better future that this book brings.

Peter Diamandis is an M.D., Chairman and CEO of the X-Prize foundation, and co-founder to several other successful high tech and space companies. In his book, he tells the story that newspapers can’t sell: how our future is bright, and how it is being shaped today. But this is not a prediction book. It talks for the most part about technologies that exist today, that are already being used out there to save lives, increase food production yield, mitigate diseases, increase life expectancy, purify water in conditions that before were considered impossible to achieve, and lots of other encouraging technologies that will show you how the future is bright, and how you can jump in to help make it brighter.

Mind opening, life changing book. If there is a a list of books you can’t miss, this one certainly features at the top. Knowing of these things, will change the way you see the future. I highly recommend this book!